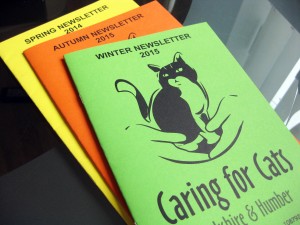 Every tail deserves a Happy Ending but the process of rescue only starts with our charity, the rest depends upon the love, commitment and understanding of the kind-hearted people who adopt our rescued cats and kittens. We regularly feature your stories in our quarterly newsletter which everyone who subscribes to our ‘Supporter Scheme‘ receives as part of their welcome to our charity.

Here are some of our typical tails with happy endings…

COCO who is now called ‘BLACKIE’
“Hi! It’s been a while since you saw me; I used to be called Coco but my very own family call me “Blackie” now, I wonder why? The previous cat who adopted this family was 17 and was nearly all white (with just a little bit of black), she was called “Whitey”! Perhaps it’s not very original, I know, but I am very well looked after and loved. I hope my sister found a nice home because I had to leave her behind at The Homing Centre, when I finally chose my own family. Love Blackie Spaven xxx”

BOB, & MOO – who is now called ‘TIPS’
“Hi; we are Bob and Moo ( now Tips). Just to let you know we are both doing well. When we came from caring for cats I (Tips) took to my new family really easily and I ( Bob) took a little more time. We both are happy with our family and love playing with the kids but enjoy some quiet time when they go to bed. I (Tips)enjoy being close to home and around the big creatures that feed us I get lots of fun and affection I also like chasing butterflies in the garden when the children are playing. I ( Bob) like playing with the children but I also enjoy a little more solitude. When its night and the family go to bed we like to snuggle up together in our bed until the morning when the fun begins again. We are both enjoying our new home and thanks for all you did for us at Caring for Cats. Bob & Tips Webster.”

RICHARD who is now called ‘ALBERT’
“We recently adopted Richard now called Albert. I thought you would like to know how well he has settled. He has had no problem bonding with our resident cat. She is very placid and is happy to sleep on the chair with him. His fur is growing back and he is not anxious anymore. In fact he is so attention-seeking we have to keep putting him back on the floor. I am fighting him off my laptop now. He has had an eye infection which has now cleared up. His ears are perfectly clear. He still looks a bit tatty – however he is improving every day! Send our thanks to Rosie who was honest but positive about him.”

BAILEY
“It was brilliant meeting a few of you and you’ve got some lovely cats and kittens. I just wanted to say thank you for helping me find Bailey because he is such a lovely, yet playful, kitten. He has fitted in right into our family and is coming on leaps and bounds. Thank you so much again.”

AMBER who was ‘TUTTS’
This young, adult, white-and-tortie girl found her very own ‘forever home’ in February this year. She sent us a lovely photo of herself and her black-and-white brother lying contentedly together. Her human wrote: “She runs rings around him!”

PEBBLES and SUKI
“Pebbles and Suki seem to be settling in, but as Suki won’t sit still (except where I can’t photograph her) I can’t send you any pictures of her.”

BILLY and DAISY
“I’d just like to say thank you for all the help we had when we went to the homing centre yesterday – we were made very welcome.
We absolutely loved Billy and Daisy – they seemed just right for us. When we got them home, they both went to explore behind the armchair in the window – Daisy came out first for a wander about, Billy was a bit shy though and stayed put for a few hours!
Both cats came to bed with us last night and jumped on and off the bed through the night – when I got up during the night, they were patrolling the top of the stairs! Today they both seem calm, collected and full of fun, they’ve both eaten well and used the litter tray. I feel ‘whole’ again having cats with us; thank you so much!” . . . more news . . . “Daisy has now claimed our bed as her territory, Billy has claimed the living room as his! They are both very loving cats who love being stroked and a bit of a fuss, Billy likes to sit on, or close to, us and Daisy likes to lie between Rob’s feet in bed! I know they’ve only been with us for a week – but they’re just right for us; they fit in to our house very well and they’re very much loved! The only problem seems to be getting Billy to scratch the scratching post and not the carpet – but he’s learning!”

LOLA who was ‘SISSY’
“I just wanted to drop you a line to let you know how our cat Lola is getting on since she came to live with us in 2009.
As you may remember, we adopted Lola (called Sissy at the time) from you on 28th August 2009. We contacted you in November 2010 to let you know that she had started to have regular seizures, and that the outlook was not promising. After first starting to experience seizures, Lola was admitted to our vets and spent a week under heavy sedation in an attempt to ‘reset’ her brain. The seizures stopped and she returned home with us with medication to prevent the seizures returning.

Unfortunately the seizures returned a week later and, despite regular high doses of diazepam, were occurring on an hourly basis. We discussed this with our vet who advised that, if they were not being controlled, the only option was euthanasia. We booked an appointment for the next morning.
In the previous few days we had been researching epilepsy control in other small animals and found that Potassium Bromide was regularly used in dogs. The available research suggested that it was not suitable for use in cats due to a high rate of complications, including death. As the only other option was to have Lola put to sleep, we asked the vet if we could at least try Potassium Bromide, on the understanding that it would likely be unsuccessful. We explained that we had researched the possible complications and were aware of the symptoms to look out for to ensure she wasn’t suffering.

The vet reluctantly agreed and had us sign a waiver that we accepted full responsibility. The turnaround was immediate and Lola has not had a single seizure since she started taking the Potassium Bromide. We are obviously aware that her seizures could still return, and that the use of this drug is unrecorded in cats so it is impossible to know if it may be causing her harm in the long term, but she currently has excellent quality of life and we are just making sure that we enjoy each extra day that we have with her. She has regular check ups with the vet and he is very happy with her progress and he is finally talking about the long term, when previously he always talked about life expectancy as being days or weeks.
We have had a couple of hiccups with supply problems of both drugs, but we have managed to get by and we keep extra drugs at home now to keep us going in case of any future problems. The last few months have really been a rollercoaster for us, but we love Lola more than ever and wanted to let you know what a ‘fighter’ she is, and how well she is doing despite all the odds being against her.”