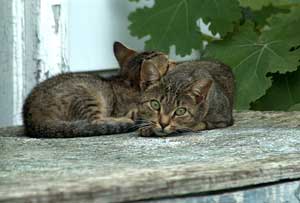 The term “feral” is commonly misused to label any cat that lives outdoors and is apparently unsocialised to humans – that is, displaying instinctive fearful, defensive behaviour (hissing, growling, spitting) and avoiding human contact. Some of these animals will have been born in the wild, the descendants of unneutered domesticated cats that have strayed or been abandoned. Many are also simply unneutered stray, homeless, unwanted & abandoned pets that have reverted to the same instinctive wild (feral) behaviours in order to survive outdoors. We see these as ‘timid strays’ – not feral (implied permanent state), just frightened (temporary state).

Feral cat or timid stray, adult cat or kitten – the charity works tirelessly to disprove the myth that such cats, whatever age, cannot be socialised and successfully rehomed. 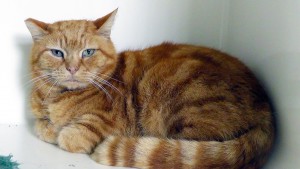 From feral to fur-baby: 5-year-old tom Mufi was happily rehomed in 2015 & is now a very loving family cat adored by his owners

Relieving the plight and suffering of such feral & stray cat colonies has been a passion for charity coordinator and cofounder, Rose Atkin, since her late teens. Combating both public and other charities’ misconceptions about the nature of feral cats – foremost, that ‘feral’ behaviour equated to a ‘wild & untameable’ animal – Rose was driven by a firm belief that the majority of these timid animals could be re-habilitated and re-homed happily to domestic life.  ‘Caring for Cats’ was therefore founded to give a vital lifeline to the ferals and frightened strays being excluded from mainstream rescues and shelters. Any cat ‘living on the street’, whether born there or strayed from a home, deserves a second chance and these are the ones the charity still gives priority to.

By trapping ferals the charity is able to neuter them as soon as possible, thus preventing more unwanted cats from being born. It also breaks the cycle of suffering caused by uncontrolled breeding—hunger, disease, fighting, injury and high mortality. The process of trapping these timid and elusive animals is time-consuming and requires both patience and perseverance.  Our aim is to ensure the cats are not left in the traps for longer than is necessary. The reward is that the huge majority of so-called untameable ‘feral’ cats become happily domesticated and the objects of much human love and affection.

“Even today Caring for Cats is the only local charity willing to accept cats reported as feral, which is why they take priority on our waiting list” Rose.

Over the years Rose has built up a network of contacts at farms and stables which are able to offer safe outside accommodation for ferals who ‘wish’ to remain feral. The charity funds appropriate neutering and medical care for the animals, thereby giving this segment of the cat population the chance of a life without hunger, disease and suffering.

We rescue the majority of feral and stray cats from high risk environments or situations, that is city centres, busy main roads, deprived neighbourhoods, or because of nuisance complaints, or when animals are injured, sick or in poor health due to inadequate food source & shelter. Returning these cats to the same location is not an option.

We are prepared to carry out TNR but only when we consider it is appropriate for the cats to be returned. We may receive requests from landowners, farms or stables looking for help with controlling a local cat colony. In such working situations, ferals are often valued as working cats that control the rodent population. However, we do expect an undertaking from owners to provide an adequate level of care & welfare for the animals; that includes at least one meal a day and weatherproof shelter for warmth. Each case or situation is assessed individually. In these instances animals are trapped, blood tested, neutered, vaccinated and microchipped, and treated for parasites and any injuries or diseases. If animals are healthy and not already socialised to humans, they can be safely returned. Anyone considering asking us for help should note our TNR policies:

Duty of Care under UK Law

Every cat, whether it’s a companion animal or a very frightened farm cat, is covered by exactly the same legislation; the 2006 Animal Welfare Act. It means that any cat owner has a Duty of Care to provide the same appropriate warm shelter, nutrition, veterinary care and protection from harm. The government has issued a Code of Practice that applies to all cats. The purpose of the Code is to provide practical guidance to help owners comply with the provisions of Section 9 of the Act. >> Click here to read the government’s Code of Practice for the Welfare of Cats. 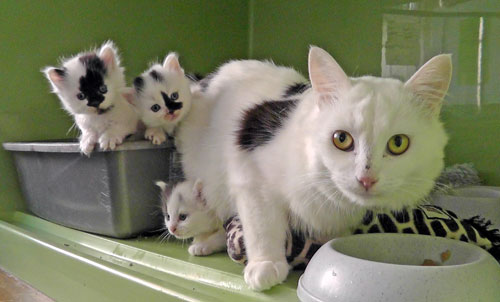 Adult female admitted as a ‘feral’; arrived pregnant, very frightened & defensive, no other rescue would take her… 4-5 weeks later, socialised to people & coming forward for strokes & very affectionate. A happy ending for her & her kittens…

The importance of neutering

Neutering cats alters not only their obvious ability to breed, but also some not-so-obvious behavioural instincts. Many ‘feral’ behaviours quickly abate after neutering, as levels of sex hormones in the body reduce along with the associated strong urges to wander, fight and mate. Both males and females generally become calmer and as a result are easier to handle. Safe in individual pens, with food/water and of course kindness, the cats learn to relax around people and begin to trust us – some, for the first time in their lives.

Once in our cattery, we find that so many of the cats reported to us as feral are simply timid. Experienced volunteers can handle and stroke the majority within 1-7 days, some within a couple of weeks, a few may take up to a month. A minority can take longer. Only a very small handful – perhaps 1-3 a year – remain too afraid of people, and are relocated to safe environments where the animal has food/water, shelter and is not at risk of busy roads or persecution.  Over a third of our 350-450 rescues each year may be so-called ferals or very timid strays. We are very proud of the fact that over 95% of mature adults and kittens alike ultimately find happy, loving forever homes through our homing centre.

We place ferals and timid strays in special pens that promote familiarisation and interaction with the carers who feed them and clean the pen out twice a day. It is at feeding times when consistent socialisation helps these frightened animals associate positive experiences with humans. Naturally gifted and empathic volunteers, who understand cat behaviour and can mirror cat body language, engage and reassure the animals daily to give valuable continuity of care. Being sensitive to the cats’ instincts and needs, special relationships can build up over time, and we often find that such animals react emphatically when they come across someone they ‘like’. It is an amazing experience to see a once petrified and defensive animal loving being cuddled by a particular volunteer they have bonded with. Once ready to go to the homing centre, we find such cats typically ‘choose’ their new human themselves and this mystical attraction is usually mutual. You are very lucky indeed to be chosen in such a way! 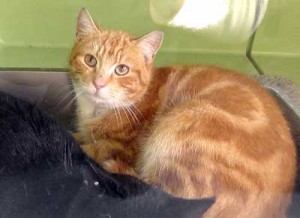 Need our help with a feral cat or colony?

Due to the inherent difficulty in trapping and handling feral cats, we manage a waiting list of cats and colonies needing our help. The more notice and help you can give us, the better. We trap in both city centre (Hull, York) and rural locations, but need someone living locally to help us by feeding the animals at a regular time/place, so we can trap more effectively. Sadly we have had our traps stolen when left out overnight, so we are unable to do this anymore unless in a secure garden or location.

Please contact our homing centre on 01430 872612 and ask for your case to be added to the Feral Cat Trapping waiting list.

Note that you will be asked to sign an Animal Surrender Form as required by our Admissions policy. This means you relinquish all legal rights of ownership and any right to information on the disposition of said animal/s. The charity shall become the legal owner of the surrendered animal/s and have sole and exclusive legal right to make all outcome decisions and take all actions deemed appropriate. [Note we have had to introduce this measure due to a minority of public abuses of the charity’s ethics and purpose.] 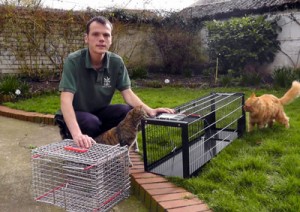 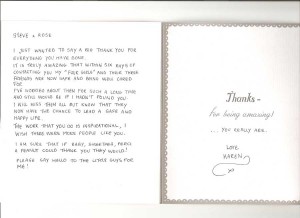 Order your Caring for Cats 2023 calendar online for just £6 plus p&p £1.80 (30p p&p for each additional Calendar). They will be posted out as soon as we receive your order.