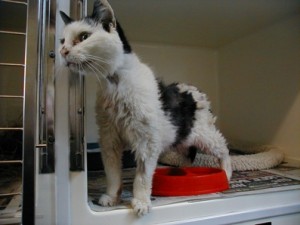 We will never know who Tufty belonged to; we ran her photograph and story in the local press but never found her owner. In May of 2005, this tragic, hungry and emaciated cat was found wandering in the Market Weighton area by a kind lady who secured her overnight and alerted our charity.

We receive phone calls every day and our coordinator has the unenviable task of prioritizing whom we can help. Tufty was an urgent case and was collected the next day. She was taken straight to the vet for a blood test and a check-up and named ‘Tufty’ because her fur was in such a terrible state. She had obviously been living rough for some time and we estimated that she might be about eleven years old.

Tufty had obviously been somebody’s pet, she was a loving, sweet cat who was just so pleased to be with people again. Her teeth and gums were found to be very badly infected and she was passing blood in her urine. We kept her at the vets where she was put on a drip and given antibiotics while a search began for her owner whom we sadly never found. Tufty could have travelled for miles and had no micro-chip implant to identify herself.

Tufty’s health failed to improve and sadly, as she failed to thrive, further investigations revealed a tumour and thyroid problems. After a week of searching for her owner, she was put to sleep, on the vet’s advice, and we were all deeply saddened.

What a sad end for such a dignified, sweet and affectionate cat. If she had had a micro-chip implant we could have traced her owner but, at least she knew love again, briefly.

Tufty cost the charity well over two hundred pounds, but had nobody else to help her. There are lots of cats like Tufty out there. We rely on volunteers and donations from the kind public to help us in our work. We always have ‘Left Behind’ cats, those that nobody seems to want, so if you are one of those special people who can go the ‘extra mile’ please get in touch.