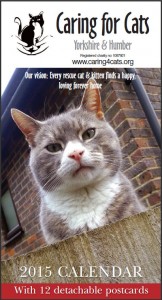 Timmy the ex-feral became our 2015 calendar front cover boy, 10 years after his rescue

Timmy was a very timid boy who had been seen as a stray, living on the street for a long time before he was caught and brought to us. It broke our hearts to see this beautiful cat who wanted to be loved but was now so nervous of humans; who can guess at the life and experiences he had had to endure? We knew Timmy needed a special home with a special person, somebody who would really understand his needs.

Miracles do happen though and he found a wonderful home; this account was sent to us by Timmy’s new ‘forever’ mum and we featured it in our newsletter Autumn 2005.

“In May of this year (2005) I was on holiday visiting a good friend in Market Weighton and could not resist a visit to the Homing Centre. As I walked into the room, one cat in particular caught my attention; a beautiful grey and white tabby by the name of ‘Timmy’. I was told that he was a very timid and nervous cat, having lived on the streets for much of his life. I asked to meet him and he sprung out of his pen, running around the room, happy to have the freedom to exercise. To everybody else’s absolute amazement, he came towards me and rolled over! I knew immediately that it was a sign of affection for me. My heart was taken from that moment; he had chosen me!

The following day my friend took me to some wonderful attractions but my mind was filled with Timmy! I had only gone into the Homing Centre to have a look and this boy had singled me out! What would my other much loved cats, Diana and Ross think? They are both happy and secure and we have a wonderful life together, living in a quiet cul-de-sac with a large garden surrounded by trees and allotments with more mice than a cat could wish for! How would they take to the introduction of a new boy and one with such anxieties? How was I going to get him home to London? Problems, problems!

The following morning I returned to collect him and take him home. I didn’t want to change Diana and Ross’s lives but Timmy needed me and had chosen me! Poor Timmy, what a long journey he faced. I spoke to the vet and in these exceptional circumstances a sedative was prescribed for him to reduce stress during his long car journey home.

Home we went. I understood it wasn’t going to be easy as he was very different from my other two; he needed a lot of work and I was the person he had chosen. For the first week Timmy stayed in the bathroom. The first day he didn’t eat, drink or leave his cat carrier and on the second day a very frightened-looking boy emerged to briefly use his litter tray. I spent a lot of time sitting by the bathroom door, talking quietly in a low soft voice; encouraging and praising him and slowly, very slowly, he came to sniff me for a moment before retreating to his cat carrier.

Every half hour I sat by the door for a few minutes talking to him until, by the third day, I could stroke him and he ate and drank in a more relaxed manner. On the fourth day he decided to venture into the hall, knowing that he had his own ‘safe place’ should he wish a quick retreat.

I introduced Diana and Ross; he absolutely loved them. They were less polite and were not impressed by Timmy’s affectionate greeting. Diana in particular was not in the mood to be sniffed, purred over and rubbed around by a complete stranger! Who was this cat?

Day five saw a confident Timmy wandering around upstairs, definitely feeling at home on this upper floor! Meanwhile I was reinforcing the love I have for Diana and Ross; they needed to know that I still loved them and, although there was a new arrival, nothing had changed between us.

Approximately ten days had passed when a now-brave Timmy decided to venture downstairs. Disaster! At 10pm I had left the dining room door open and he ventured into the garden! In a distressed state I telephoned Rose (the charity’s co-ordinator) who was wonderful (as always) reassuring me that by now he would probably know where his home was and everything would be alright.

At 6am the next morning he calmly walked back through the door with a look on his face that said ‘I don’t think I’ll do that again! Where’s my breakfast?’ From that day on, Timmy has been allowed outside during the daytime but he never goes far. Whenever I call his name, he comes running in with a little smile on his face.

His life is very different now, Timmy is happy, confident, safe and, most important of all, loved! Yes it was hard work and a lot of hard work for both of us; he had to learn to trust me as his opinion of people was not good after his life on the streets. Who knows what this beautiful boy had had to endure?

To truly win Timmy’s trust took a lot of time, patience and dedication for which I know he is absolutely grateful. Every day he thanks me in so many ways; the way he greets me or rolls over. I only have to say his name and he rolls on his back! He lets me pick him up and kiss and cuddle him and he tells me he loves me in the way he jumps on my bed at 4.30 every morning telling me ‘Get up, get up it’s breakfast time!’ Most of all, I know he’s grateful because of all the love he gives me.

In some way I can say that Timmy has made my life complete; sounds funny but that’s how it I feel about him. I can see in his eyes that he never knew that a life like this could exist for him or be there for him.

Diana and Ross accept him now. Perhaps they’ll never be the best of friends but they are all secure; each and every one knows how very much I dearly love them.”

We are all so thankful that Timmy found this wonderful home but there are always cats with stories like his looking for very special people to give them a second chance. Are you one of those special people?

Order your Caring for Cats 2023 calendar online for just £6 plus p&p £1.80 (30p p&p for each additional Calendar). They will be posted out as soon as we receive your order.