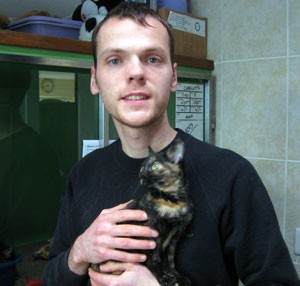 Steve Worth, pictured at the South Cave cattery where he works

Dedicated volunteer, cat carer and runner Steve Worth is once again running the London Marathon in April 2016. This year he is donating all funds raised towards our appeal for Ginger Nut the injured feral cat that had been the victim of a callous air gun attack.

Steve has been caring for feral cats since he first volunteered with the charity in 2005. Understanding that such cats are just frightened animals reacting by instinct to perceived threats ie humans, Steve spends many hours with these timid animals, giving them a reason to trust people – most for the first time in their lives.

“They deserve a loving home just like any other cat, which is why I am running this year’s Marathon for Ginger Nut. He has only been with us a week now but is already becoming calmer and enjoying life in a safe place, probably for the first time ever.

“Just because he was born outside, or abandoned when young, does not mean he cannot find a loving home now. Please help me raise funds to cover his veterinary costs and highlight the need for greater understanding of so-called ‘feral’ cat behaviour. Time and again we prove the majority can be rehabilitated and successfully rehomed to special people willing to give them a second chance.” 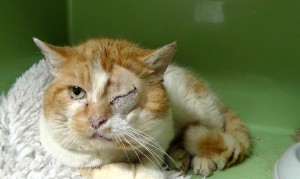 Ginger Nut, whose veterinary bills will total around £2000 due to complications after an air gun attack

Steve is aiming to raise at least £1000 towards the estimated £2k+ costs of Ginger Nut’s emergency surgery and ongoing medication and veterinary care. The three-year-old male has had to have his left eye removed and two shattered teeth extracted because of the damage caused by the air gun pellets. He will need anti-biotics and anti-flammatories for several more weeks to control the infection and discomfort of the wounds.

People can sponsor Steve by clicking on the button below or see more on his fundraising page.