Caring for Cats has won the award for Best Cat Rescue Centre at the national Wetnose Animal Rescue Awards 2012, billed as the green carpet animal event of the year.

Charity founders Rose Atkin and Steve Marshall attended the ceremony in London on 9th March to accept the award and help publicise the exceptional work and achievements of all Caring for Cats volunteers.

“Everyone should be extremely proud of the voluntary work they do for this charity, it is fantastic to have our efforts recognised nationally at this award event. Steve and I were both privileged and humbled to win alongside like-minded people with such inspirational stories to tell.” said Rose.

Yorkshire-based event sponsors Burgess Pet Care invited all independent UK rescue centres to nominate themselves for a recognition award under seven different categories. Caring for Cats won the Best Cat Rescue category against numerous other small independents across the country.

Charity Treasurer Steve Marshall commented: “I think we stood out to the judges because of our exceptionally high animal welfare standards which we never compromise on. Cat welfare is the charity’s highest priority and at the heart of every decision we make.” 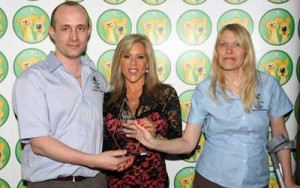 Steve and Rose receiving the award from Samantha Fox in London

Other winners included the world-famous David Shepherd Foundation with its founder making a special guest appearance. Renowned conservationist and artist David Shepherd spoke with great wisdom, wit and emotion about animal rescue and congratulated all the winners present on their invaluable contributions.