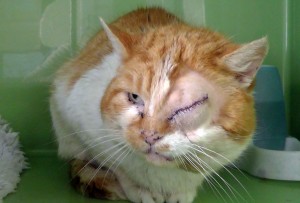 Injured feral tom had been shot in the head twice, resulting in one eye having to be removed

UPDATE 24/2/16: Very sad news… after 2 weeks in ICU our vets took the sad decision to put GINGER NUT to sleep yesterday.
Vet Zosia and the Swanbridge team did their utmost to save him, treating a complex bladder problem following his major surgery. With heavy heart Zosia told us fluid had begun collecting in his abdomen, which would have led to sepsis. Thank you to everyone who cared & donated to his treatment costs appeal – we were very moved by the compassion shown by so many to this homeless feral cat. Each of your donations meant this charity could give him the veterinary care he so desperately needed… Run free Ginger Nut… Xx
We are leaving his fundraising appeal open as we still need to cover the est. £2000 costs of his initial surgery and emergency care. We are also continuing the campaign to find and prosecute the person/s responsible.

UPDATE 11/2: POOR Ginger Nut has been re-admitted to our vets with a urinary blockage & infection. He has needed IV fluids, catheterisation and further scans, but is now comfortable again. Vet Zosia says he’s even enjoyed a little head stroke…

5/2/16: We are caring for a large ginger & white male cat that was reported to us as a badly injured feral. X-rays show the cat had been shot in the head twice; one pellet hit the left eye, causing severe damage and abscess. The eye could not be saved and had to be removed by the vet. Two shattered teeth have also had to be extracted. The charity became involved when a concerned resident on Bedale Road, Market Weighton, asked us to help trap this cat after noticing it was injured & scavenging in their garden over several months.

Rose Atkin, charity coordinator & co-founder: “It is a callous individual who can shoot a defenceless animal like this. It has suffered greatly with these terrible wounds over a long period. This cruelty is likely not to be an isolated incident. We dread to think how many other cats or wildlife have been victims and not survived.

“The two air-gun pellets are still embedded in the cat’s skull and jaw bone as they cannot safely be removed. This tomcat has probably only survived because of his size and the greater bone density of unneutered adult males.

“We want cat owners in the Market Weighton area to be aware of the potential danger as a number of pet cats are said to be missing. We are talking to both the local Police and the RSPCA about this and are urging anyone with information to come forward.”

Sadly such air-gun attacks on cats, other small pets and wildlife are not uncommon any more. The RSPCA regularly receives reports from vets and owners all over the country.

“There are steps owners can take to minimise the risk to their outdoor cats. Pets should always be kept indoors from dusk till dawn when most accidents happen. In high risk areas we would advise erecting cat-proof fencing or installing a garden enclosure. We provide recommendations on our website and have leaflets at our homing centre, incl ProtectaPuss cat containment systems from ProtectaPet. In certain areas we would only recommend cats as indoor pets.”

A fundraising page has been set up to help pay for the veterinary treatment that was given to poor Ginger Nut for his injuries. Current estimates are approx £2000 due to complications and secondary infections…