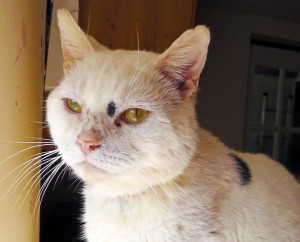 It was another hectic year for our small charity of volunteers, but we are so proud to have rescued an amazing 419 cats & kittens in 2015. Many were saved from sadly desperate situations and around two thirds were reported to us as feral. The vast majority successfully found loving homes with new owners and families via our homing centre. Just eight were returned to safe feral homes where they receive food, shelter and care as needed. All this was made possible by a small team of unpaid volunteers and the kindness of our many donors.

Rose Atkin, charity coordinator and cofounder, said: ”We continue to focus our work—and funds—where they should be – entirely on caring for cats rescued from heart-breaking, tragic situations. We have nearly six-figure annual veterinary and welfare costs (instead of six-figure staffing costs), as we prioritize the most desperate cases – that is, injured, sick, abused, feral & homeless animals often requiring emergency veterinary care, surgery and medication. Many of these cats are at risk of being euthanised or, in the case of strays and ferals, suffering a miserably short life of hunger, disease and pain. All because they are homeless, many having been abandoned through no fault of their own.”

Priority cases rescued in 2015 included:
– Cats and litters rescued from inappropriate homes, living in appalling neglect, and at risk of further cruelty.
– Road traffic accident victims, where complex injuries or fractures meant the cat was facing euthanasia.
– Numerous cats whose owners had died or gone into care without making provision for often elderly pets. Typically these animals are abandoned outside, without food or shelter, or facing being sent for euthanasia.
– Otherwise healthy stray or unwanted cats & kittens, trapped by public organisations and sent to be euthanised as unwanted nuisance/pests.

Last year also saw the return of the Charity Free Neutering Scheme run in October. This was thanks to the generosity and hard work of our supporting vets Swanbridge Veterinary Hospital in Swanland who performed the operations at cost. As a result a staggering 931 cats in the Hull area were neutered in just four weeks.

“Three local charities funded the costs, with Caring for Cats, the smallest, contributing an equal share of nearly £6000. This is worth every penny of the charity’s money as it addresses the stray and feral problem at source, preventing so many future unwanted and abandoned litters.
“I would like to thank everyone who helps us rescue, too many individuals to name, working behind the scenes. Also our supporting vets Swanbridge group (Hull) and Battle Flatts (York), Pets at Home fundraising, as well as Petplan and other charitable trusts that have donated towards our vital feral rescue work.
“Ferals are widely mislabelled by many as cats able to survive outdoors and so are not in need of rescuing. Our work proves most are not untameable/feral, only frightened. Regardless of their ‘owner status’ our charity believes all have as much right to a life without uncontrolled breeding, hunger, disease and suffering as anyone’s pet cat. They will therefore continue to take priority on our waiting list.”