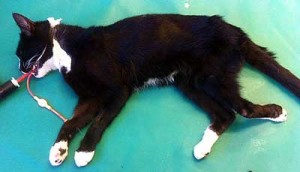 Rear leg dislocated and had turned around the wrong way, causing much pain & suffering as the cat tried to feed itself

Caring for Cats is appealing for donations to help homeless and stray animals in the region after rescuing a badly injured cat from Hull city centre. The black and white cat was found starving and with a badly dislocated hind leg. Despite its terrible injury and severely weakened state the cat was friendly, and taken to Swanbridge veterinary hospital in Swanland for treatment.

On examination the vet reported that the leg was so badly injured it had completely turned around and was facing the wrong way. As it had been like this for some time the surgeon had no option but to amputate. Caring for Cats agreed to take responsibility for the care and welfare of the animal, now named Kinky, and is appealing to cat lovers in the region for cash donations this Christmas to help pay for her care costs.

Steve Marshall, charity cofounder told us: “As a charity we do not put animals to sleep if their injury can be cured with surgery or medication. Cats can easily get about on three legs. Now Kinky has had the leg removed she is recovering well and getting stronger each day. Despite her prolonged suffering this young cat is very friendly and loving. We believe stray animals like Kinky deserve the same chance of life that any much-loved pet does.” 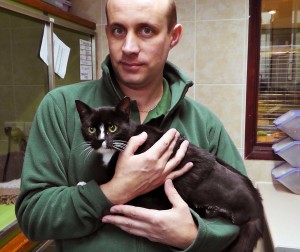 Kinky after her leg amputation, pictured with Steve Marshall at the charity’s isolation unit

The charity says Kinky is just one of dozens of desperate cases they are asked to take on each year. Her treatment costs alone are estimated to be over £1000.
Steve added: “Our mission is to relieve the suffering of homeless, stray and injured animals by providing appropriate veterinary care, neutering and responsibly rehoming them. But we can only carry out this vital work with the continued support of kind public donations.”

If you can help the charity please contact their homing centre on 01430 872612 or visit our website to donate online.